“The science is clear that climate change is a real and present danger. We owe it to future generations to take action now.” –Don Beyer

Don Beyer served as a member of Governor Tim Kaine’s Climate Change Commission and knows the challenges we face. While serving as President Obama’s Ambassador to Switzerland, Don saw firsthand the glacial melt caused by global warming and create the first carbon footprint reduction plan for a U.S. embassy – reducing it by 40%.

Despite the urgency of this situation, there has been no successful climate legislation that addresses this crisis since 2009. It’s time to take action.

the single most effective way of reducing carbon emissions.

A carbon tax won’t be fair unless it includes tax credits and other mechanisms to ensure protection for poor and middle-income Americans. Don will make sure that these households don’t bear a disproportionate share of the burden.

Don will also be a strong advocate for local environmental concerns. He opposes fracking in the George Washington National Forest, has voiced strong concerns

about the proposed expansion of the Lorton Landfill, and will work with local leaders to restore Dyke Marsh. 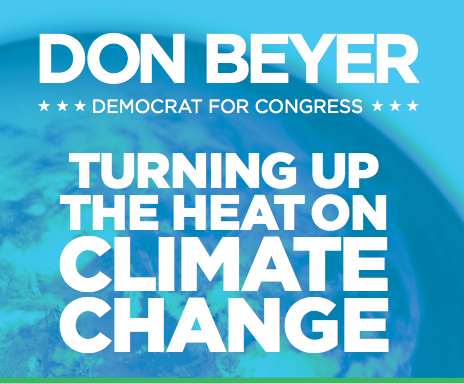